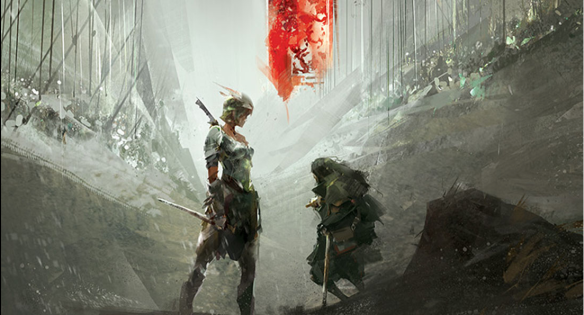 In Kameron Hurley’s THE MIRROR EMPIRE, Book 1 of the WORLDBREAKER SAGA, two parallel worlds find themselves in a fight for survival, pitted not only against each other, but themselves. Each world is a morphed version of the other, with dopplegangers that may be near-identical in name and appearance, but who are starkly different in personality and motivation. As a dying star poisons the air and sky of one world, the militaristic Dhai people of that world are invading and attempting to slaughter as many people of the other world as possible, to save themselves before it is too late. Because here’s the catch — travel between worlds is possible, but only if your doppleganger on the other side is dead or non-existent. For one world to live, the other has to go; only one people can survive.

THE MIRROR EMPIRE is a fast-paced and exciting read, and the start of quite possibly one of the greatest political dramas I have ever picked up. Using classic fantasy tropes in wholly unique ways, Hugo Award Winner Kameron Hurley has created a masterpiece epic that has surely secured her place in the world of fantasy writing, and won me over as a lifelong fan. I started recommending THE MIRROR EMPIRE to people before I was even a quarter of the way through, and now that I’ve finished the book, I can’t. stop. talking. about it.

But first, a note on how to read this book. There is a certain level of skill that needs to be applied to tackling a book like this, and it is not really a novel I would recommend for first-time fantasy readers. All works of speculative fiction, by definition, require a willing suspension of disbelief, but there are some books that demand a creative interaction with the text in order to fully comprehend the world that exists within its pages. THE MIRROR EMPIRE is one of those books.

The worldbuilding is rich and thorough, with gorgeous description and a lot of really cool (and often terrifying) things happening on every page — divine satellites and people who can draw on their power; hungry walking trees and trees that spit acid; fierce women warriors serving an alien Empress; temples that are alive and breathe and speak; giant dogs and bears with forked tongues; portals to other worlds opened by blood magic; ritualistic cannibalism. There is a lot going on in this world, and Hurley does not hold our hand through any of it. She has built this world and set out, with careful intent, a path for us to follow, but we are on our own to understand the kind of place this is, with all its countries, cultures, wildlife (which, in the Dhai Woodland, often includes the plants), and magic. There is a glossary in the back of the book if you need it, but I only recommend referencing it when you really, really have to, because figuring it all out along the way is an integral part of the journey. And it is a challenging journey, not one for travelers who expect a tour guide and little mints on their pillow, but for adventures who are willing to take the plunge and fully immerse themselves in this strange, foreign land right alongside the people who inhabit it.

And there is a lot to say about the people of this world. The characters in THE MIRROR EMPIRE are so vivid, so engaging, that they have actually featured in my dreams (which is rare, and I think of myself as a pretty avid reader). THE MIRROR EMPIRE is a multiple point-of-view book, and each POV character is chosen impeccably well, with their own trajectories that each add something unique to the overall story without feeling detached or out of place. We follow Lilia, a woodland Dhai originally of the other world, as she embarks on a journey to fulfill an old promise to her mother, while discovering secret powers she never even knew she had. Roh, a Dhai with the ability to call on the power of Para, one of the three heavenly satellites, seeks adventure in a foreign land in order to save his people and change his own fate. Zezili, a half-Dhai legionnaire in the country of Dorinah, attempts to uncover the secret behind a military campaign that has her slaughtering Dhai slaves and, once she has her answer, must decide whether to remain loyal to her country and Empress, or do what needs to be done to stop it. Taigan, a sanisi from the country of Saiduan, is bound by blood to search Dhai for those with the ability to draw on the power of the dark star, their only hope in warding off the other world’s invaders. And Akhio, the unlikely new leader of Dhai, tries to keep his country together amidst political turmoil and attempted coups, all the while grappling with the knowledge of the other-world invaders, who look, but do not act, exactly like his own people.

We cannot talk about the worldbuilding and the characters of THE MIRROR EMPIRE without also talking about gender and sexuality. Arguably the most striking and important elements of this book are the opportunities Hurley takes to represent different gender identities and sexual norms. Gender-queer and non-binary representations are a core part of THE MIRROR EMPIRE: In Saiduan, we are introduced to ataisa, the Saiduan word for folx who identify as neither male or female and take on gender-neutral pronouns ze and hir. Taigan is gender-fluid, identifying as both male and female, but at different times — Taigan’s genitals and inner organs are constantly in flux, and we see Taigan contemplate Taigan’s gender-fluidity through Taigan’s feelings of isolation at not really identifying as ataisa, and not as strictly male or female, either.

Relationships between characters in terms of sex, love, and power dynamics are used to highlight sexual diversity and gendered violence. Queerness seems to be widely accepted across the whole of this world, and almost all of the characters are at least bi- or pan-sexual. The Dhai are unproblematically polyamorous and polygamous, and it is common for a Dhai family to consist of multiple husbands and wives who all have sex and children with each other, and for those husbands and wives to even have lovers outside of the marriage. We also get to see a loving, sexual relationship between an older Dhai woman and a younger Dhai man, a flip on the old Hollywood and literary trope of pairing older men with much younger women. Consent is also an important part of Dhai culture, and permission is required to even touch another person on the arm, an important nod to our-world conversations about boundaries and consent when it comes to physical or sexual contact.

Dhai is egalitarian when it comes to gender, if not slightly matriarchal in that its founder and all of its former leaders have been women. Saiduan more closely resembles the patriarchal culture of our world, but in the matriarchal country of Dorinah, things are very different. In Dorinah, women are the sole warriors, lawmakers, holders of all important positions of power, while the men stay home as subservient househusbands, wear makeup and girdles, have their wives’ initials cut into them as a mark of ownership, and are expected to be sexually available to their wives (and their wives’ female relatives) at all times. We see this dynamic primarily through Zezili’s relationship with her husband Anavha, a “gift” given to Zezili by the Empress of Dorinah for her service as a top legionnaire.

In terms of highlighting issues surrounding gendered and sexual violence in Dorinah, Hurley achieves something that most other writers, filmmakers, showrunners have only tried to do. Instead of relying on graphic depictions of violence against women and women’s oppression under patriarchy — concepts that have become overused to the point of laziness and actually work more to uphold patriarchy than dismantle it — Hurley flips the script. It is the men, now, who are subject to sexual harassment, absurd beauty standards, and being considered property. In taking long-held sexist attitudes towards women and turning them on their head, Hurley creates a matriarchal culture that in many ways is a dark parody our own, real-world patriarchal society. It’s all brilliant and horrifying, and effective in forcing the reader to contend with these issues without invoking worn tropes.

All of these things — the rich worldbuiding, the unforgettable characters, and the skillful upheaval of sex and gender norms — give life to a story so powerful it left me breathless by the final page. I’m usually pretty good at figuring out plot twists and endpoints in stories, but I couldn’t even tell you how many times during THE MIRROR EMPIRE I thought, “Oh, okay, I see where this is going…” only to be completely blindsided just twenty pages later. Or, if I was right, another plot twist, entirely unforseen, was just around the corner, or the journey to point A to my projected point Z was not at all what I thought it would be. It’s a story that keeps you guessing and white-knuckled the whole way, and the end contains some of the cruelest cliffhangers I have come across in a long, long time. Cruel, I tell you; just CRUEL.

Thankfully, THE EMPIRE ASCENDANT, the second installment of the WORLDBREAKER SAGA, is due out this October. I’ve already pre-ordered my copy, and am counting down the days!